Many physical sicknesses and emotional disorders were healed in the New Testament by either Jesus or his followers rebuking the spirits that were causing the illness (Luke 4:33-36). It is a fact of scripture that we have been given awesome power to command the evil one and his kingdom, to curb their power and to overturn their works. This is not meant to make us arrogant or proud--not even against the evil spirits, but it is intended for our relief and protection from oppression by the enemy (Luke 10:17-20). Commands can be issued of either a defensive or offensive nature.

But Jesus rebuked him, saying, "Be silent and come out of him!" And when the demon had thrown him down in their midst, he came out of him, having done him no harm. Luke 4:35

The What and Why of It

Jesus and the first disciple rebuked demons regularly. Why don't we? The problem is not in any lack of power on our part. We have been given the same 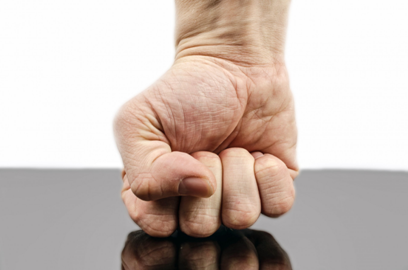 Holy Spirit as an indwelling presence - you can't have more power inside you than that! We have the same authority as believers which the first disciple possessed. If we want further empowerment we can seek the baptism of the Holy Spirit and God will surely send it to us or lead us to it, however that is meant to work out. Have the demons "thrown in the towel" and slunk away? Highly unlikely!

Demons are difficult to discern, but fairly easy to deal with once exposed. Some are definitely stubbornly entrenched. In situations of individual ministry I have been involved in a few knock down, drag out fights that went on much longer than I would have liked. I have also been unable to dislodge some even after repeated attempts. But most frequently, once the demon has been identified and the person has repented of what it represents (hate, lust, jealousy, etc.), then the rebuking or casting out of the spirit is simple.

Nevertheless, the demons are absolutely subject to the Name of Jesus and they know it; they have been utterly defeated by the Blood of Jesus and they know it. If you are a believer and you also know and have confidence in the power of that Name and of the Blood He shed, then they know that as well. They know it the way a dog knows when your command "means business" and when you're just mouthing words you heard other people use, hoping for the response they got.

The one thing that the demons have going for them (other than being invisible, intelligent and very crafty), is that the person who needs to be free of them, somehow (usually) gave them either unwitting, tacit permission to "come in" or outright agreement to what they represent. That is why deliverance works so much better if the person seeking it is led through steps of cleansing by repentance first. This also helps them hold onto their freedom once they have been delivered.

As in all areas of healing, however, we are dealing with great mysteries here, as well as invisible realities that are complex beyond our imagining. There is no place here for presumption or complacency, as the seven sons of Sveca found out.

Then some of the itinerant Jewish exorcists undertook to invoke the name of the Lord Jesus over those who had evil spirits, saying, "I adjure you by the Jesus, whom Paul proclaims." Seven sons of a Jewish high priest named Sceva were doing this. But the evil spirit answered them, "Jesus I know, and Paul I recognize, but who are you?" And the man in whom was the evil spirit leaped on them, mastered all of them and overpowered them, so that they fled out of that house naked and wounded. Acts 19:13-16

Rebuking prayer is similar to commanding prayer. The difference is that prayers of command are directed at things of the created order (nature, animals, human physiology), while rebuking prayer is directed at the infernal kingdom - the demonic henchmen who serve the enemy. Since the created order only turns against the purposes of its Creator when it is under the influence of the evil ones, this can become a fine distinction. One example of the "blurring of the lines" took place when Jesus "rebuked" the winds that were threatening to capsize the little craft He and the disciples were in on the Sea of Galilee.

And when he got into the boat, his disciples followed him. And behold, there arose a great storm on the sea, so that the boat was being swamped by the waves; but he was asleep. And they went and woke him, saying, "Save us, Lord; we are perishing." And he said to them, "Why are you afraid, O you of little faith?" Then he rose and rebuked the winds and the sea, and there was a great calm. And the men marveled, saying, "What sort of man is this, that even winds and sea obey him?" Matthew 8:23-27

To rebuke means to reprimand or reproach, censure or admonish - one living, thinking being to another. Jesus "rebuked the winds and seas." Why? Do winds and seas have a mind or will of their own with which they can rebel against the created order? It would be very hard to establish that from scripture! Yes, I am aware that all of creation is groaning, awaiting our full restoration and that the very stones will praise Him if we don't. All of creation is far more alive than probably any of us can imagine, but nothing in all of creation needs to repent of "rebellion" but us. Therefore, rebuking creation as a castigation of blame makes little sense - it has been made a slave to the enemy (placed under the curse) through our disobedience. We and the enemy's dark kingdom (who will never repent) are the ones who deserved to be rebuked!

More likely, Jesus was rebuking the enemy's influence upon both wind and seas and in so doing, restoring them to operating under the Creator's command. This is akin to freeing someone from the grip of a nightmare by shaking them, then saying, "Wake up and come back into your right mind!" In actual practice it may not matter whether you rebuke the wind or the demon and, in a crisis, there may be no time to draw fine lines. However, all things being equal, I would rather direct my ire and indignation against the slave master in the form of rebukes and issue commands of restoration to the created order once it is released from the enemy's black hand.

That evening at sundown they brought to him all who were sick or oppressed by demons. And the whole city was gathered together at the door. And he healed many who were sick with various diseases and cast out many demons. And he would not permit the demons to speak, because they knew him. Mark 1:32-34

And he said to them, "Go into all the world and proclaim the gospel to the whole creation. Whoever believes and is baptized will be saved, but whoever does not believe will be condemned. And these signs will accompany those who believe: in my name they will cast out demons; they will speak in new tongues; they will pick up serpents with their hands; and if they drink any deadly poison, it will not hurt them; they will lay their hands on the sick, and they will recover." Mark 16:15-18

And in the synagogue there was a man who had the spirit of an unclean demon, and he cried out with a loud voice, "Ha!  What have you to do with us, Jesus of Nazareth? Have you come to destroy us?  I know who you are - the Holy One of God." But Jesus rebuked him, saying, "Be silent and come out of him!" And when the demon had thrown him down in their midst, he came out of him, having done him no harm. And they were all amazed and said to one another, "What is this word?  For with authority and power he commands the unclean spirits, and they come out!" Luke 4:33-36

And demons also came out of many, crying, "You are the Son of God!" But he rebuked them and would not allow them to speak, because they knew that he was the Christ. Luke 4:41

While he was coming, the demon threw him to the ground and convulsed him. But Jesus rebuked the unclean spirit and healed the boy, and gave him back to his father Luke 9:42

The seventy-two returned with joy, saying, "Lord, even the demons are subject to us in your name!" And he said to them, "I saw Satan fall like lightning from heaven. Behold, I have given you authority to tread on serpents and scorpions, and over all the power of the enemy, and nothing shall hurt you. Nevertheless, do not rejoice in this, that the spirits are subject to you, but rejoice that your names are written in heaven." Luke 10:17-20

And God was doing extraordinary miracles by the hands of Paul, so that even handkerchiefs or aprons that had touched his skin were carried away to the sick, and their diseases left them and the evil spirits came out of them. Acts 19:11-13

What's it like to rebuke a demon?  Were we ever surprised... 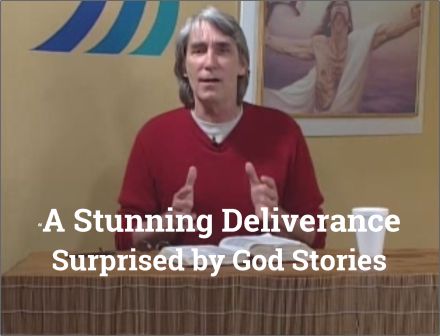 Commanding Prayer   Not only are we invited to command the invisible spirits, we are also invited to command the natural realm. Disease can be commanded to leave. Creative miracles can be commanded to come. Even the kingdom of God can be commanded to come. We all know that Jesus taught us to pray, "Thy Kingdom, come!" Less well understood is that in the Aramaic the language is quite emphatic: "Kingdom come!" Of course, we leave it up to the Lord to determine in what way and at what time His Kingdom should best arrive. In all of this we certainly are not presuming to issue commands to the Lord. Nevertheless, the powers He gives us include doing what He did. Jesus commanded healing and he commanded even storms to cease. He is in us still seeking by His Spirit to do more now than He did then, more even than "we could ask or imagine."

Consider taking our free eCourse for Healing. We have designed a complete series for personal transformation, "Matters of the Heart," to help Christians gain emotional freedom and inner healing. In all there are 24 Main Healing Lessons and 24 Head to Heart Guides to help you bring your heart to God and receive His Great Heart for you in return!

We have books plus beautiful art and design items
Intimacy with Jesus
Signs of the Times
New Life in Christ
Our Amazing God
Salvation Questions
Navigating through Grief
Books and Art
© 2023 by Healing Streams USA. All rights reserved.