This teaching on overcoming the occult is just one lesson of our free eCourse for personal transformation, 'Matters of the Heart.' All 24 lessons will be helpful to the person seeking restoration and freedom.

A Spider's Web of Evil 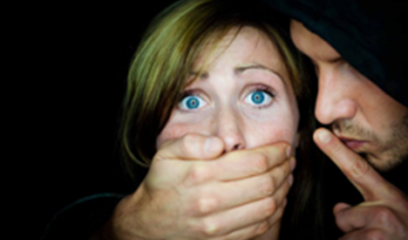 events, but is constructed by points of direct contact with spiritual darkness. For some people this will be a lesson of little consequence - they have been blessed to have walked a path free and clear of trespassing into the occult domain. For others their immersion into the 'depths of Satan' has been so devastating (whether of their own volition or forced upon them by others) that this lesson may seem like a pop gun, when what they need is a canon for overcoming the occult damage they have experienced.

For many of us, however, contact with this realm has been by dribs and drabs: A little here, a little there, and the infiltration into our lives through the generations before us may hardly have been noticed in itseffects upon us. Indeed, this is a domain that prefers to remain hidden in that half-light where curious or spiritually hungry souls go to find 'something more' in the way of spiritual life and experience - not necessarily wanting evil, but drawn towards things beyond the pale of orthodox Christian faith.

By posing as legitimate spiritual experience the New Age has made huge inroads into Western culture. The spider knows how to make the web all but invisible to the unsuspecting fly it seeks to catch. The enemy is a deceiver! One pastor said deception is like falling asleep: You don't know you are asleep until someone tries to wake you.  Let spiritual darkness be exposed for what it is and we will all wake up and seek the safety and freedom our Lord offers.

Watch a short video about occult spirits on our YouTube channel

If you have ghosts in your house, who are you going to call?

The occult is an entry point for the enemy.Like trauma the occult can open doors for the enemy's kingdom to enter and oppress us, but unlike trauma we may not have been aware of anything obviously 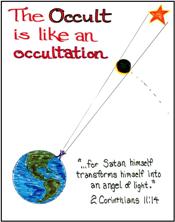 wrong in our times of contact with it. Nevertheless, scripture shows that transgressing upon the occult is serious; in the Old Testament the penalty for it was death and no sacrifice could atone for it. As New Testament believers we do not war against flesh and blood in this way, but Israel's example clearly shows us that we are not to be compromised by any involvement with the occult - we must keep it out of our lives.

The occult, like unforgiveness, is also a major block to healing. Until our contact with it is put under the Blood, it gives the enemy the legal right to bind and torment us with the curse of the law, since we let him lure us away from God's protection. The occult realm is a false god that seeks both worship (to become our heart's desire and daily focus) and service (to get us acting according to its desires). You don't have to love evil to worship and serve it; all you have to do is simply begin desiring the things it presents, thinking they are good. Then it's got your focus. Soon it gets you.

In ancient times, high places were sites where idol worship took place. Under our covenant prideful beliefs are the new high places where the Lord may be rejected in favor of that which is false. This broad definition could apply in general to all of the operations of Satan's kingdom, but the occult, more narrowly and traditionally defined takes four main forms in scripture:

The occult counterfeits genuine spiritual power and light (truth). In astronomy a planet that crosses in front of a star is said to cause an 'occultation,' meaning that the star is 'hidden from view' - the

dictionary definition of the occult.  This gives us a perfect picture of Satan's counterfeiting activity. Just as a planet reflects the sun's light, but has no fire of its own, so too the enemy seeks to draw our attention by a deceptive display of occult knowledge and power, while obscuring the wisdom and power that come through the One True God and his servants.

Do not expect this kingdom to exhibit its dark side very often. Spiritual darkness prefers to disguise itself as light - at least in terms of attracting unsuspecting 'flies' (us!) into its web. We would hardly walk into such a trap if we could see the evil on the other side. This 'occulting' activity of Satan is described in scripture. As you read these texts try to discern the false religion that spread around the world which began with the visitation of 'an angel of light' to an unwary soul.

And no wonder, for even Satan disguises himself as an angel of light. 2 Corinthians 11:14

But even if we or an angel from heaven should preach to you a gospel contrary to the one we preached to you, let him be accursed. Galatians 1:8

How the Occult Makes Its Appeal

There are two main temptations of the occult. These are the 'flesh hooks' that the tempter uses to snare the unwary. Overcoming the occult necessarily requires that we completely repent of and forsake every temptation to cultivate personal pride or attempt to control others.

The spirit behind it tempts with pride. Divina-tion is the act or practice of trying to foretell the future by occult means. The cults also seek knowledge, claiming a superior and secret wisdom or way of salvation, but it doesn't come from God or the Bible.

The spirit behind it tempts with control. Witchcraft and sorcery seek to make things happen by the power of the mind, special talents or natural elements. It is a form of control - a rebellion against God's order or authority.  Sorcery uses spells to control others or events; witchcraft uses objects. Both rely upon demons to do the real work.

Sorcery is a translation of the Greek word pharmakia used in Galatians 5:19 to describe one of the works of the flesh. This is the root for pharmaceuticals, our word for prescription drugs. There is a subtle caution here that dependency on prescription drugs can easily become a way of trying to bypass the curse of illness by not seeking to get right with God about what may be wrong in our hearts that is causing the physical problem (see The Spiritual Roots of Disease).

Be alert to symptoms of occult penetration. The thoughts of the one being deceived become increasingly negative with an unhealthy interest in the 'dark side' of life. The mind becomes confused, 'foggy,' blanks out easily, loses strength to think things through rationally and logically. Fear intensifies. A person is often bound to past occult contact in fear or pride. Other signs may include hatred of God, rejection of God's Word, inability to stay awake in church or when reading scripture.

The power of an occult experience to entrap people is built upon the temptation to believe in one's own experience and perspective above God's Word. Powerful deception comes from the way the occult spirits make the truth claims seem real. The connection is made by means of a subjective experience which conveys 'authority' or credibility to the truth claim of the practice - whether it is a 'spooky' feeling from ghosts in a house reputed to be haunted, or facts spoken during a séance that only the deceased could know, or crystal ball predictions that sometimes come true. If the final arbiter for the one becoming deceived is their own experience, rather than the Bible, the 'spider's web' has not been set in vain.

Like modern retailers, the enemy is a master at giving out 'loss leaders,' bits and pieces of knowledge or supernatural encounters, in order to get you to buy into what he wants to sell you. Then the real merchandising (the selling of your soul) begins. One occult activity, no matter how slight it seems, can easily lead into many other practices. Don't buy the lies! God desires that we choose life by avoiding that which He calls evil.

Keeping in mind C.S. Lewis' caution about becoming either too dismissive of or too obsessed with this realm (see Kingdoms in Conflict), we will want to have 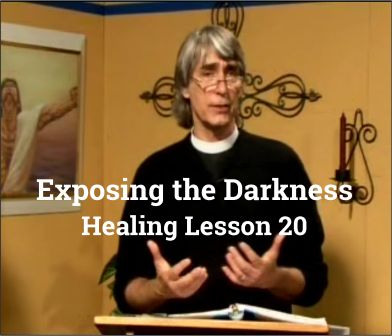 some sound principles of balance and discernment concerning occult contact. Consider the following for starters:

1) It is heart attachment to any wrong thing or habitual sin which evil spirits use to subvert our focus and cause us to perish - not the 'flirtation' of momentary temptations...

Stay fully exposed to the Light--that's certain to expose and drive out the darkness!

Father, thank You that You have both the power and the loving desire to cleanse me from all occult contact. Jesus, thank You for the Blood that You shed which is my liberation and the enemy's doom. Holy Spirit, thank You for leading me into all truth by removing the veil of deception that blinded me in the past. I ask for and gratefully receive all of Your ministry to me in this area. Please continue in every way to lead me out of darkness into Your glorious Kingdom of Light! I renounce any occult practices in the generations of my fathers and I repent of having walked in them myself.  I repent of my own involvement or contact with _____.  Forgive me and break its power over me and my generations. Wash me with the Blood of Christ. Fill me and seal me with Your Spirit.

Read the rest of this article by taking our free eCourse or look it up in the Downloads section (Exposing the Darkness).

Overcoming the stronghold of fear and anxiety

Donate so that others can receive free resources through this ministry

We have books plus beautiful art and design items
Intimacy with Jesus
Signs of the Times
New Life in Christ
Our Amazing God
Salvation Questions
Navigating through Grief
Books and Art
© 2021 by Healing Streams USA. All rights reserved.